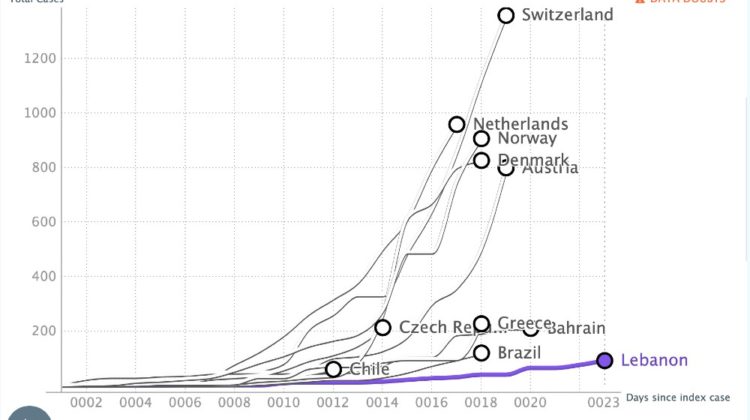 According to the chart published today by the AUB Global Health Institute, Lebanon is relatively doing much better than other countries, such as Switzerland, Netherlands, Norway, Denmark, Austria, Greece and Bahrain, in containing #COVID19 till now.

The chart compares the number of reported cases in each country and shows a slower trend for Lebanon, which is encouraging but a bit misleading for three reasons:

– The study does not take into account the population in each country, which is a major factor when comparing reported cases.

– Not all cases are being reported. We’ve heard many rumors about that but nothing concrete so far but given the lack of trust in the authorities, it’s hard to rule it out.

– The biggest problem to date worldwide is the lack of testing, hence most stats being reported are severely underestimated. If we were to believe our Health Minister, we should be at our peak right now, but if people are not getting tested, then we will never know. Speaking of testing, the government needs to figure out a way to make the test cheaper and encourage more people to get tested. I heard people are paying up to 300$ for the test which is outrageous!

All in all, it’s very hard to judge how well we’re managing the coronavirus crisis and I honestly don’t think giving out a statement as optimistic as “Lebanon doing much better than others” will help, because we need people to stay alarmed by the severity of the situation and make sure they stay home.

Personally speaking, I think the health ministry should have implemented a travel ban and a lockdown two and even three weeks ago. We have one airport, open borders with one country, a worsening economy with barely any tourists so we could have grasped the opportunity to take stricter measures and still be in the tens of cases instead of 130.