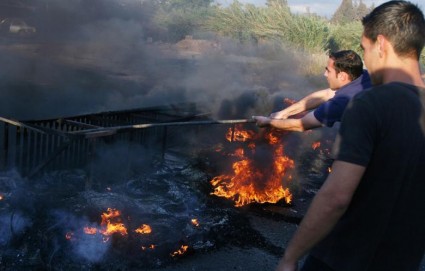 May 20th, 2012
– Sheikh Ahmad Abdel Wahad killed along with his bodyguard after being shot at an army checkpoint
– A young man who got stabbed few days ago succumbed to his wounds and died at Makassed Hospital. Army & ISF are surrounding the hospital.
– Gun shots heard in Halba
– Lebanese Army kicked out of Halba and all roads closed
– Gunmen all over Halba streets and its surrounding.
– All Akkar roads were closed and blocked by tires.
– All roads leading to Tripoli closed by angry demonstrators. Gunshots heard in Tripoli.
– Bekaa road closed by demonstrators.
– Eb Elias road closed.
– Khaldeh Road closed.
– Bechara el Khoury and Mazraa roads closed by demonstrators in Beirut.
– Roads closed in Verdun.

May 23rd, 2012
– Bomb Scare at Airport
– Shooting in Jdeideh kills 1 person and injures 3.
– Clashes in USJ between Hezbollah and Kataeb students
– Convoys in Kaslik in support of the Lebanese Army.
– Airport Road closed
– Sarba (South) road closed
– Hand grenade thrown at a mosque in Tripoli
– Gun shots in Hamra and Caracas.
– Hand Grenade explodes in Raouche

Maybe now our dear government and prime minister will understand why Arab countries have advised their citizens not to visit Lebanon. That is just sad!