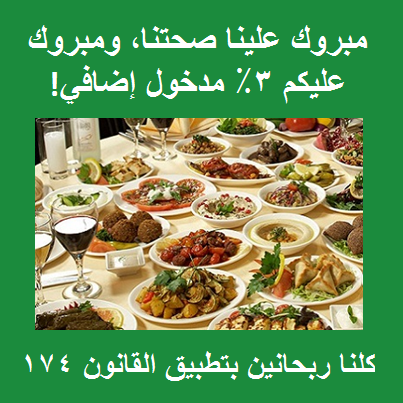 Law 174 – No Smoking Lebanon Facebook Group proudly posted today that the latest research conducted by Dr. Jad Chaaban (AUB) has revealed that the “the indoor smoking ban that went into effect in September 2012 has *caused* a revenue increase of +3% for the sector”.

The full research was not published yet but I do hope that they are only considering restaurants that applied the non-smoking law because no one seemed to care about this law in most of the places I visited lately, whether nights, pubs, restaurants etc…

In a press conference today, Dr. Jad Chaaban (AUB) revealed the results of his latest research, which is based on official historical data from the Ministry of Finance:
1) The “restaurants, cafés, pubs, and nightclubs” sector in Lebanon has experienced a revenue growth of 27% over the past three years. This contradicts several claims by the Syndicate of Restaurants stating the sector has been performing very poorly.
2) The indoor smoking ban that went into effect in September 2012 has *caused* a revenue increase of +3% for the sector, which has helped offset the large losses due to political instability. This contradicts the Syndicate’s claims last year that the law would lower revenues in the sector by 25%.

So let’s recap: Law 174 saves 10 Lebanese lives per day, increases the revenues of the hospitality sector by 3%, saves the government $350M in yearly healthcare costs, and could generate $2M-$10M in government revenues TODAY if the pending fines are paid.

Instead of blaming all the woes of the country on Law 174, IT IS TIME TO APPLY IT!