Back in October 2015, I criticized the decision to allow three foreigners players to play in Lebanese Basketball teams and said that it would kill local talent and would destroy the game for the years to come. FLB President Walid Nassar should have never taken that decision and the outcome is as expected. Foreign players are scoring on average 70% of all points and Lebanese players not being given enough time to prove themselves.

I looked at the game stats for the past 8 rounds and computed the average of points scored by foreigners every game for every team. Riyadi, the only team that objected to the 3-foreigners rule was the only team with foreigners scoring less than 50% (assuming Ismail Ahmad is Lebanese of course). Even if we count Ismail as a foreign player, the percentage will be around 52%, which is still better than any other team. 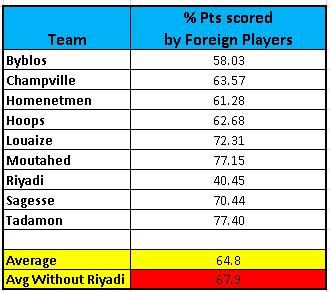 As you can see from the table above, Riyadi is the only team where Lebanese players score more than 50% of the score. Byblos come second with 58%, followed by Homenetmen and Hoops. The teams where foreigners score the most (Above 75%) are Tadamon and Moutahed. There’s one game where Moutahed foreign players scored 90% of the point!

Believing in the improvement of Lebanese players is somewhat true as they would be learning from more experienced foreign players. But this only seems to apply during training and not during games. The presence of 3 foreign players on the roster has benched talented Lebanese players and created a huge shadow over local players. In fact, if we look at the top scorers in the league, all of them are foreign players. There are barely any Lebanese even in the top rebounds and assists stats.

Over the weekend 3 different games were held:

– Mouttahed vs. Tadamon
– Sagesse vs. Hoops
– Byblos vs. Riyadi

For each of the teams here is the percentage of points scored by foreigners:

As you can see, unless a local talent has a breakout performance, the presence of 3 foreigners takes up 70% if not more of the points scored in a single game.

PS: All stats were taken from the [Lebanese Basketball App].

Thanks Chadi for the help!