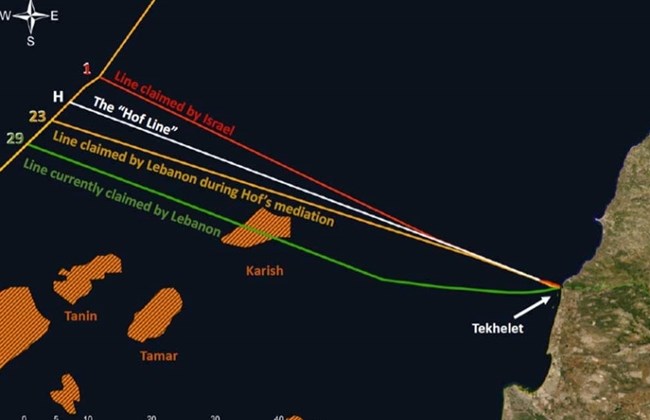 During the most recent maritime discussions between Lebanon and the Israeli side, the Lebanese delegation “did not recognize the already known 860-square-kilometer disputed zone but claimed 1,430 additional square kilometers that include a substantial part of the Karish field — supposedly in Israeli waters — in what was called the maximalist claim of Lebanon”.

As shown in the picture above, Line 23 was the one claimed by Lebanon during Hof’s mediation back in 2011/2012 but Lebanon is entitled to an additional 1,430 square kilometers, which they have yet to “claim” officially by amending the decree No.6433 which ended at Point 23.

Senior Field Reporter Rachel Karam raised the matter on Twitter, and asked Public Works minister Michel Najjar & his “boss” Sleiman Frangieh to sign the decree before the Israeli side kicks off his gas exploration plan. I wish Rachel would have tagged all those involved in this matter not just a puppet minister and his boss, but the message is still clear. This decree must be signed!

Both Syria & Israel are violating Lebanese maritime rights yet the Lebanese authorities haven’t done much to claim what’s rightfully ours. Is it part of a deal our corrupt Lebanese political class has struck to guarantee its share of Lebanon’s oil wealth? Or is it merely incompetence and negligence?

What is clear is that Line 29, on which Lebanon based its negotiations, is, legally, the soundest of all the lines on the negotiating table, and unless we amend this decree the soonest, we won’t be able to claim it and preserve Lebanon’s rights to its maritime wealth.