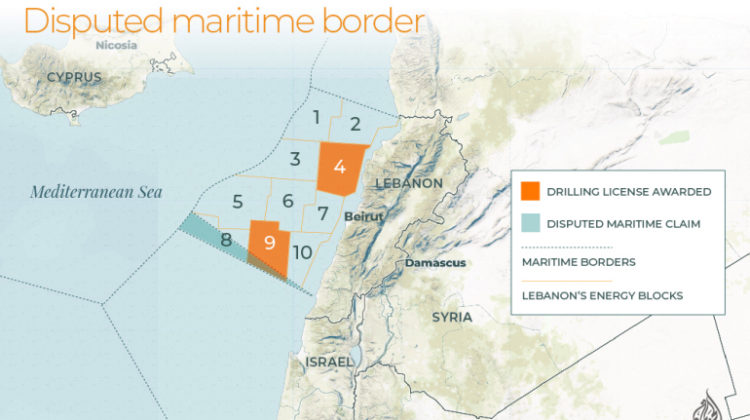 There’s no simple answer to this question. Both parties were clear that these talks are not a sign of peace-making or normalization, and are merely an attempt to solve a 10 year old economic dispute.

How did it start?

Quoting Al Jazeera, “the dispute dates back to 2011 when Israel ratified a maritime border agreement with neighbouring Cyprus that used as a reference point a maritime border that Lebanon and Cyprus had agreed to in 2007, but which Lebanon’s parliament never ratified. Lebanon later in 2011 clarified its maritime border to the United Nations, saying that it included an additional 860 square km (332 square miles) south of the 2007 line. Israel disagreed, and the dispute over that sliver of the sea was born.”

A first round of talks between the Lebanese & Israel delegations will be hosted the United Nations peacekeeping force UNIFIL. The meeting will be held in the same room in UNIFIL’s base but the talks will be done through a mediator. From the Lebanese side, members of the delegation will consist of two military people Brig. Gen. Bassam Yassin and navy Col. Mazen Basbous, and two civilians, Wissam Chbat, geologist at the Lebanese Petroleum Administration and Najib Massihi, expert on the maritime issue. The Israel delegation will include the director-general of the energy ministry, a diplomatic adviser to Israeli Prime Minister Benjamin Netanyahu, and an Israeli army strategist.

Caretaker Foreign Minister Charbel Wehbe promised “fierce” negotiations, which is just talk, since agreeing to negotiate is already a compromise from the Lebanese side, whether those in power want to admit it or not.

The Shiite “duo” issued a statement today to voice their rejection of the composition of the Lebanese delegation tasked to negotiate the southern border demarcation, calling for reforming it immediately. They claim that the framework agreement did not mention including civilian figures.

Since the delegation was already announced, chances are both parties were aware of the names and are just saving face. After all, even if we’re not normalizing officially with the Israelis, negotiating with the “enemy” over maritime borders means we are recognizing them in a way, which doesn’t sit well with Hezbollah or his ally. How are we talking to a state that we don’t recognize and are at war with? How do we negotiate maritime borders if we don’t acknowledge Israel’s existence? Aren’t we screwing over the Palestinians if we let Israel exploit its maritime resources?

What will the negotiations achieve?

It’s too early to tell, but what’s clear is that reaching an agreement is way more beneficial to the Israeli side at this point, as Lebanon is going through its worst economic crisis in years, and Lebanese parties are too busy fighting each other instead of forming a government and fixing the mess they got us into. Signing an agreement will definitely get the Americans off our back for a while but if Lebanese can’t get their sh*t together, no one will be able to help us, with or without oil.