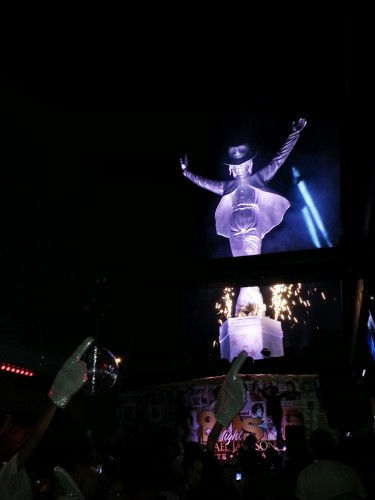 Picture from the 80s night at B018 – Tribute to Michael Jackson

If Lebanon is truly paying the price of Syria’s war, then why is there traffic everywhere I go? Why is traffic increasing on a daily basis from Beirut to Jbeil? Why are all the nightclubs and rooftops packed from Wednesday to Sunday? Why are the beaches packed on weekends?

I know that numbers suggest that Lebanon’s economy is suffering, Arab tourists are not coming and tourism is bad but it honestly doesn’t feel that way wherever I am going lately. This makes me wonder how bad traffic would be if all these tourists were here.

“As soon as you even utter the word ‘weapons’ you’ve killed tourism,” Paul Achkar, head of the Lebanese hotel association, told AFP. “Three hundred tourism establishments have closed down since the start of the year,” he said.
Although confident that the industry will recover, Tourism Minister Fadi Abboud said the figures for the start of the season were pitiable.

“The occupancy rate at hotels in Beirut is barely 35 percent this month, half of the usual at this time of year.
“Outside Beirut, it’s catastrophic. We’re talking about five percent compared to the usual 35 percent,” Abboud told AFP.
The atmosphere in Beirut, dubbed party capital of the Middle East, is not so morose, and Christian areas such as Byblos or Jounieh have also fared better than other areas. [AFP]