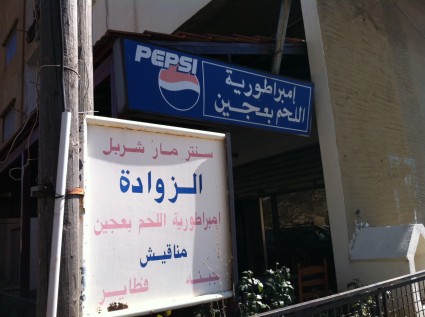 I finally went to visit the empire of Lahm Baajen and its self-proclaimed emperor Afif. The place is small and is on the right side of the road just before you reach Faraya. It sells all sorts of Manakish but is famous for its Lahm Baajin man2ouche.

Aside from the Manakish, the owner of the shop, Afif, is well known for amusing his visitors with his funny stories, and has become popular after he showed on the LBCI program Kalamanji few years back. 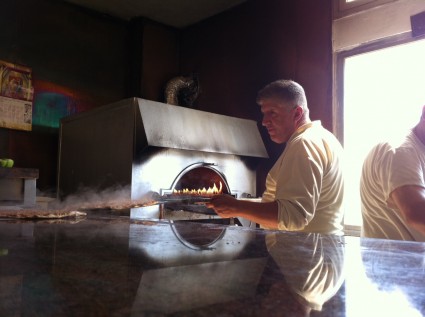 Once we got in the place, Afif called one of his workers and asked him to come greet us. Apparently, everytime someone comes in, this guy has to come and say “Ya Hala ya Hala bil shabeb” or something like that.

After this weird yet amusing greeting, we placed our order and started listening to Afif. He was engaging in some weird talk with one of his customers on Maameltein and the Super night clubs before he looked at me and asked me if I was an NDU student.

Me: No I am an AUB student and I did my MBA at LAU.

At this point, he switched the talk to another topic and I left with my Lahm Baajin man2ouche which was really tasty and worth the wait.

I recommend this place for anyone who’s planning a trip to Faraya.