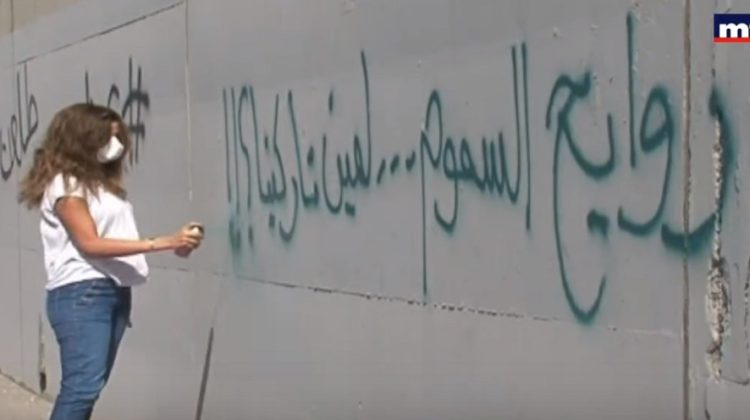 MTV Reporter Nawal Berri headed to Choueifat to do a report on the newly cleaned up walls near Beirut’s airport and questioned an official in the area about the disgusting smells that are being ignored. Hisham Rishani, who’s in charge of the works that cost almost $50,000, claimed that painting the walls all over again were needed to improve the country’s image for all the tourists visiting Lebanon, and that they are planning to install cameras to make sure no one spray paints them again.

Needless to say, cleaning the walls should be the least of our worries at this point and is a waste of money and time, especially when there are persisting and critical environmental and health-related issues in that area.

Nawal obviously wasn’t convinced by this guy’s argument and decided to spray paint the wall and write “برافو الحيط نضف بس الريحة شو منعمل فيها” (Congrats on the newly cleaned up wall but the smells are still there) to remind the municipality that they haven’t done anything in 9 years to treat the horrific smells in the area.

I’m not sure what point she was trying to prove but she obviously failed miserably. If the aim is to challenge the authorities’s corruption and incompetence, she cannot allow herself to be selective and subjective. If the aim is to show that she can get away with vandalism to prove a point, then she’s pretty much proving she’s part of that corrupt system lol!

If I were her, I would have proposed to the municipality or whoever is in charge there to invite graffiti artists to spray paint these walls and turn them into art works. Reporters and journalists are supposed to work hard on their story and be as objective and impartial as possible but unfortunately that’s not the case in Lebanon.