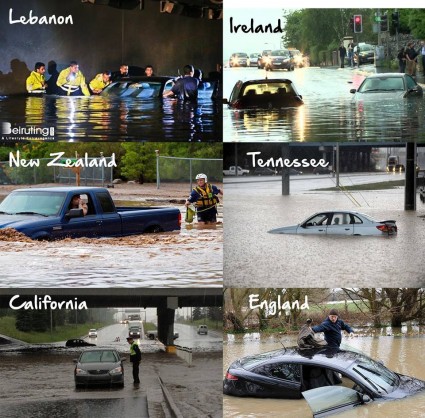 The picture above has been circulating online to tell people who are nagging about the floods in Lebanon that streets and roads get flooded everywhere, even in developed countries like the US, England and Australia. Of course floods happen everywhere but that’s not the real problem in Lebanon and I think Lebanese should complain 24/7 to the authorities about the shitty infrastructure and useless measures being taken during rainy days.

Just a few words to those claiming this is normal:
– People got stuck for hours (More than 2 hours on average) just because it rained a bit, not cause of a storm.
– There were barely any police units on the roads to assist people stuck inside their cars. Thumbs up to the Civil Defense units though for doing an impressive job despite being badly equipped.
– The authorities released a statement asking people to stay home after everyone was already stuck in traffic.
– A vital road like the airport one SHOULD NEVER be flooded by water and closed for 5 hours.
– In developed countries, the authorities take extraordinary measures for upcoming storms. This was just a normal rainy day. What are the measures being taken for next week’s Alexa storm?
– Shouldn’t there be a hotline dedicated to situations like that?