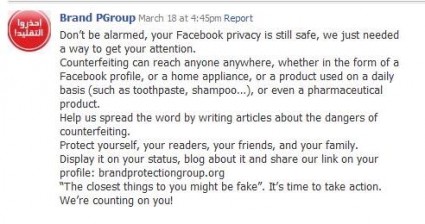 Brand Protection Group Campaign is an association of leading local, regional, and international manufacturers and distributors that joined efforts in March 2003 to fight counterfeit products in Lebanon and the Levant region. [Website]

Even though I am supportive of such campaigns, but duplicating people’s facebook accounts and sending them friends requests is not how you get one’s attention. Darine Sabbagh seemingly liked it and Mustapha found it brilliant but I am against such approaches.

It is an invasion of privacy as some people might have mistakenly messaged the fraudulent account and many users could have reported the correct account and caused its closure by mistake as well. Playing with people’s personal profiles is not funny.