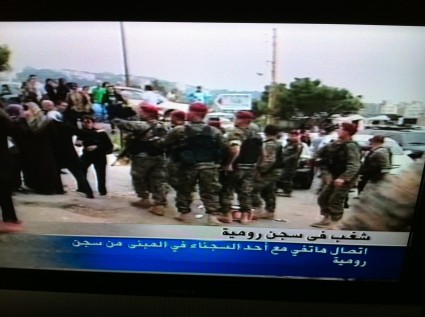 Several inmates clashed with wardens after a protest against “transfer and routine inspection procedures” inside Roumieh prison turned violent on Saturday. [News]

I was watching a Basketball game on LBCI when they stopped the broadcast and turned to Roumieh prison to follow up on the prisons. It seems there’s been some heavy clashes between the army and prisons but what caught my attention was that a prisoner actually called LBCI and told them what is happening in the middle of all the action. He had a TV in his cell and a cell phone as well. TVs are maybe available to privileged prisoners but since when are cell phones allowed in jail?