Run For Peace is a new iPhone and iPad game about Peace. Salim, a new hero, is a peaceful guy who has dreamed about Peace since he was 3 years old. Unfortunately for him, Peace has not ever come to his part of the world.

One day he got so desperate that he decided to defy his fears. “Come on Salim, you are brave, show them what you can do!” he shouted to encourage himself. From that moment, he decided to embark on a Peace-spreading journey across the Middle East. [RunForPeaceGame.com]

Run for Peace is another game from GameCooks, the same people who brought us “Birdy Nam Nam” almost a year ago. All GameCooks members are Lebanese. [Website]

I downloaded the game and played it a bit and I was disappointed as a Lebanese not to see tires burning on my way. How dare they ignore such an important and crucial part of our Lebanese culture?

The game is available in the [AppStore]. Download it and show some support to our fellow Lebanese. 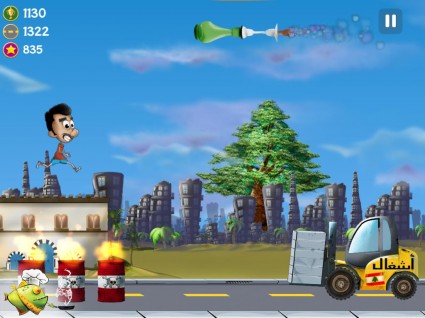