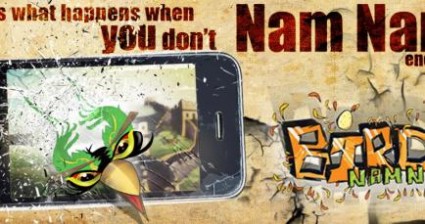 Lebanon-based Birdy Nam Nam launches a new version of their iPhone app game today, an answer to the extremely popular “Angry Birds”– in Arabic. While you may remember the clever video that referenced Angry Birds in light of the Arab Spring, transforming Arab dictators- Ben Ali, Mubarak, Gaddafi- into pigs that the birds tried to oust, Birdy Nam Nam offers a different take that is no less addictive.

The game was created by two Lebanese brothers, Lebnan & Arz Nader, as well as Jean-Christophe Hoelt. It was downloaded more than 300,000 times since its launch. [Article]

I don’t know why they are comparing it to Angry Birds. It’s a whole different game with different rules. I gave it a try yesterday and it’s not that great.