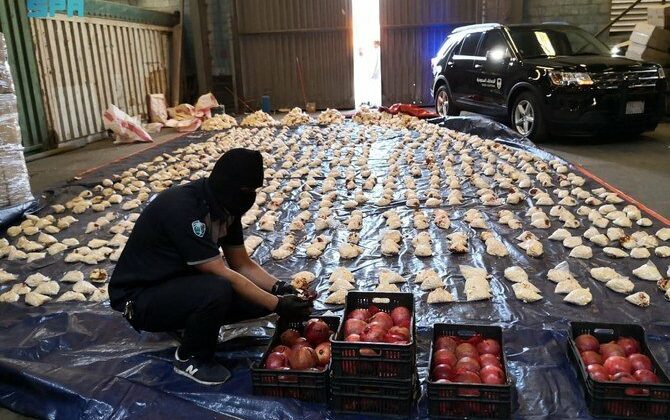 The Saudi authorities foiled an attempt yesterday to smuggle more than 5 million Captagon pills hidden inside pomegranates into the Kingdom. The shipment was coming from Lebanon, and the Saudis on the same day offered assistance to the Greeks to seize more than four tons of cannabis hidden in a shipment of industrial cupcake-making machines heading from Lebanon to Slovakia.

Exporting fruits and vegetables to Saudi Arabia brought in $29 million in 2019. Given the current economic situation, this is a huge setback to farmers and the whole sector. Lebanon’s total exports to Saudi Arabia were worth 273.1 million riyals ($72.82 million) in the fourth quarter of 2020. [Reuters]

Today the Greek authorities found 4 tons of drugs packed inside machines to make cupcakes, heading from Lebanon to Slovakia via the sea.
This came after Saudi Arabia found massive shipments of drugs came from Lebanon packaged inside vegetables and fruits. pic.twitter.com/Tw2fDMBfAk