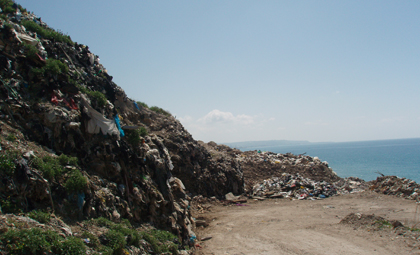 I’ve come to realize that the place causing most of the traffic on the maritime road facing City Mall lately is a new open air night club in town, called Pier 7.[Chahe’s post]

I don’t want to judge it before going there but is it a smart idea to open an open-air place in an industrial area and facing the Karantina garbage mountain? Can you imagine the smells there? How about the inexisting parking spaces in that area that Chahe mentioned as well?

It is always refreshing to see new places opening up, but I wish people thought a bit further before rushing and opening new places just because that’s the trend and “of course its gonna work”.

I am not saying the place is bad, just that this is a very bold move to open there, so the expectations will be very high from people and any ‘smelly’ night might cost the place dearly.

Gino went to the opening night and wrote a review for those interested in reading it [Review]. No mention of smells though, maybe he had a cold.