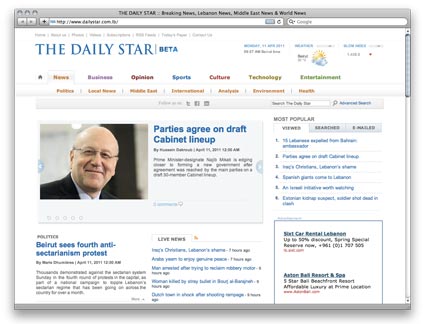 The Daily Star website has finally been redesigned! It’s the third time since it’s gone under a major redesigned since it was launched back in the late 90s but even after the second redesign though it still looked and felt like an outdated news site from the 90s. It seems the third time is the charm since the new site is a lot cleaner than before, easier to use and also easier to read.

But, the only reason the site is great is because the old site was horrible. I personally think the new site lacks any personality when say compared to gulfnews.com or arabianbusiness.com. The header says it’s still in “BETA” stage so there might be more changes coming. In any case, check out the redesigned site [Here]