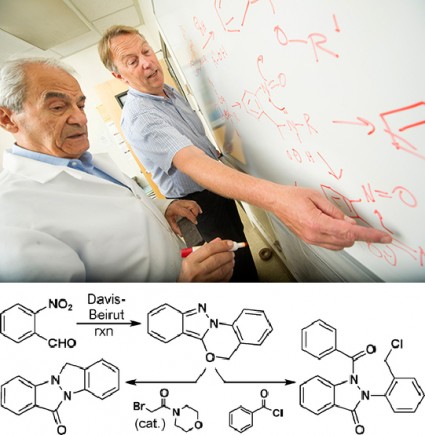 The Davis-Beirut is a new chemical reaction discovered by Mark Kurth from the University of California and Makhluf Haddadin from the American University of Beirut. The Davis City Council “congratulated and thanked the scientists by way of a proclamation (approved 5-0), acknowledging “with gratitude the honor and recognition bestowed on the entire Davis community”. [Source]

Here’s more info on the new chemical reaction found for those interested:

The Davis-Beirut Reaction converts a 2-nitrobenzylamine to a 2H-indazole by simple treatment with aqueous base in an alcoholic solvent. While simple to effect, the mechanism by which the reaction proceeds is intriguing and makes the new ring by a nitrogen-nitrogen bond-forming process.

The resulting 2H-indazoles have considerable potential in medicinal applications, and, because of this, our research has the support of the National Science Foundation, the National Institutes of Health, the Tara K. Telford Fund for Cystic Fibrosis Research at UC Davis and American University of Beirut Royalty Funds.

Current efforts with the Davis-Beirut reaction are focused on development of myeloperoxidase inhibitors with implications for people with cystic fibrosis. [Source]

And this is LBC’s report:

Elie, who’s a Med student, also [wrote] about this.