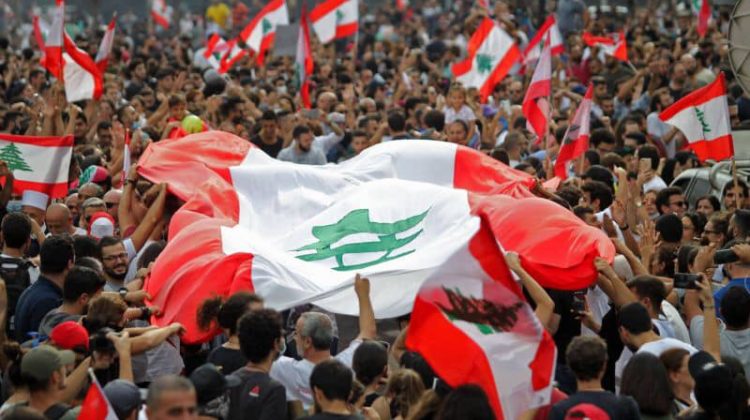 Tomorrow will mark the tenth day since the protests have begun and there are still no signs of the government resigning. Rumors spread late yesterday but they were denied. In the mean time, thugs are still trying to infiltrate the protests in Riad el Solh to divide the crowds but they are being held up by the police and army units.

At this point, a lot of people are starting to question what’s next, especially after Nasrallah & Aoun’s speeches in the past couple of days, which brings me to the following points:

1- The FIRST & ONLY demand is for the government to resign; all other options are pure diversions that will give more time to those in power and weaken the people’s movement. No we don’t want to dissolve the parliament or prepare for early elections before we have a new government formed of specialists and technocrats capable of applying whatever was agreed on and appointing incorruptible and credible judges. This is the simplest of demands, and amazingly enough, the Prime Minister for some reason still didn’t resign or even suggest getting re-assigned to form a new government.

2- Looted Public Money Recovery Law should be voted on in the parliament, but it will be useless if the same people are the ones deciding who will judge them and how. When I mentioned yesterday the president had returned the law, I was told his aim was to perfect it by adding a dozen amendments. This being said, it will take time to pass this law or start implementing it and we know how long things will take before we see results. That’s why this shouldn’t be a priority before anything else.

3- Closing main roads is a way of protesting: There’s nothing wrong in protesting and keeping main roads closed especially when the protests are at this scale. However, don’t be like some idiots are doing and block your next door neighbor’s road just because everyone is doing so. I’ve seen a couple of videos of random young men blocking roads in residential areas and tight streets which make no sense. Coordinate with the army, police and municipality and keep things civilized and calm.

4- Don’t hate on other Lebanese, unity is key: People committed to political parties are not going to vanish overnight, and many are joining the protests because they believe in them. Even those who are opposing them want the same demands. I’ve had several arguments with people opposing the protests and we aligned on many things, which is why it is important to communicate with others and avoid confrontations. Our leaders don’t want our best, we know what’s best for us and should work on it.

5- Early elections are not going to wipe out all Lebanese parties: To build on the last point, political parties will always be a part of the Lebanese political ecosystem and are not going anywhere. What this revolution has achieved so far is build up pressure on these leaders and awake the silent majority. Change will happen but it needs time, patience and persistence.

6- Don’t despair: We’re not gonna end up having another civil war or in chaos. Don’t listen to such claims because they are not true. No one wants a civil war and no one can afford it anyway. As for chaos, we’ve already survived several times without a government and a president for years.

7- The revolution doesn’t need a leader: The beauty of this revolution is the fact that it’s leaderless. Every single person is leading it in a way and there are plenty of ongoing debates and discussions taking place in Riad el Solh. The last thing we need are leaders to take advantage of this movement and ruin it for all of us.

8- No negotiations before a new government is formed: Calling to sit and talk with the President or the PM or anyone is useless before those in power take the first step by replacing this current government.

9- Don’t spread fake news: Media coverage has been biased from all sides so far, which is why it is important to back track every video and make sure of it before spreading lies. Google pictures or a piece of information before sharing it.

10- We’re writing a new page for Lebanon: Remember how things have changed in just ten days and how many years we’ve been waiting for such a revolution. Stay strong and focus on the bigger image.