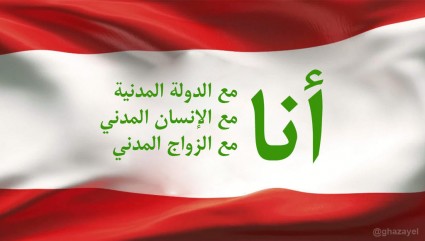 I was reading Dalal Mawad’s post earlier today and unfortunately the latest updates on civil marriage is that there are no updates, and the civil marriages that took place in Lebanon are still not approved by the Ministry of Interior. We have all shown our support to the civil marriage campaign a year back but despite Pr. Michel Sleiman’s request and the pressure exerted on the ministry, nothing has changed and it doesn’t look like anything will anytime soon.

I still believe we are far from legitimizing civil marriage in Lebanon due to many obstacles, mainly the influence of religious authorities and the lack of officials (MPs/Ministers/Politicians) brave enough to take the initiative.

We need a long-term strategy that consists of doing little things but the strategy isn’t there and there aren’t enough people right now to come up with initiatives similar to what Ziad Baroud did years ago, by allowing us to strike off our sects from our ID cards. As for the civil marriage Facebook page that went viral for some time, it’s still getting updates but has a website that doesn’t work.

Here’s a reminder on the steps to follow to get a civil marriage in Lebanon:
– Go to a mayor and fill in a request to strike off your sect from your ID.
– Submit the form at the personal status directorate of your region
– Get a proof of address (إفادة سكن) for you and your spouse.
– Perform medical tests for you and your spouse and get witnesses for your wedding.
– Afterwards, you need to post a memo on your new house’s door stating that you are getting marriage in a civil way and asking people to contest the marriage if they have a valid reason. Once done, you can go sign your marriage contract at your notary public!

Keep in mind that unless the Ministry of Interior approves the wedding, your children will face legal issues as you are still not considered legally husband and wife.

Here’s a summarized list of steps on how to have a civil marriage in Lebanon:

Step1: Strike out the mention of both Kholoud’s and Nidal’s sects from their respective IDs to prove before the law that they are not affiliated with a sect that forces them to marry before a religious court. They thus acquired the right to hold a civil marriage as per Article 60 L.R.

Step3: Obtain a legal document signed by a notary public after both parties chose the articles included in the marriage contract as well as a financial disclosure that guarantees the rights of each party to the marriage.