The documentary film telling us the amazing adventure of the the Lebanese Rocket Society will be out soon in theaters across Lebanon by end of this month. I will be attending a press screening next week and posting a quick review. You can read more about it [Here].

The adventure of the Lebanese Rocket Society began, in the early sixties, at Haigazian University, a young Armenian University in Beirut, where a group of students, led by a professor of mathematics, Manoug Manougian, set up the Lebanese Rocket Society to “create and launch rockets for space study and exploration.” They produced the first rocket of the Arab World. The project had no military character and was aimed at promoting science and research.

The adventure, which appears nowadays rather unbelievable and surrealistic, was nevertheless a serious one. Between 1960 and 1967 – at the time of the Space Race, revolutionary ideas, and Pan-Arabism – more than ten solid fuel Cedar rockets were launched. The launchings gave rise to national celebrations. To commemorate the 21st anniversary of Lebanon’s independence, a set of stamps representing the Cedar IV rocket was issued. The Arab defeat of 1967 put an end to the initiative and slowed down the thrive towards this aspect of technological modernity of this part of the world.

Nowadays, considering the world divisions and the bellicose attitudes, it would be unconceivable to allow a small team of dreamers to launch rockets into the skies of the Middle East.

The project enables us to consider the historic events of those years: pan-Arabism, the notion of a vast Arab nation and its decline after the Arab armies were defeated by Israel in 1967. A defeat which confused our societies, our parents’ generation, and which transformed deeply the Arab world and, first and foremost, our image of ourselves.

The documents, photos and mainly films relating to the space project have disappeared.

This unusual and heroic adventure, which had made the front pages of the press, is nowadays forgotten. It appears like an anecdote in the course of history, a story kept secret.

The project investigates the apparent absence of the Lebanese space program from our personal and collective memory, shedding light on our perceptions of the past and present – and our imagination of the future, exploring the notion of a collective dream. Documents and archives as well as reconstitutions and art installations attempt to question this story and the ideas of reenactment, reconstitution and restaged in the present time. [Website] 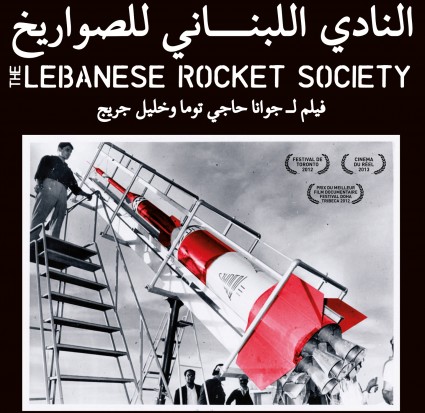