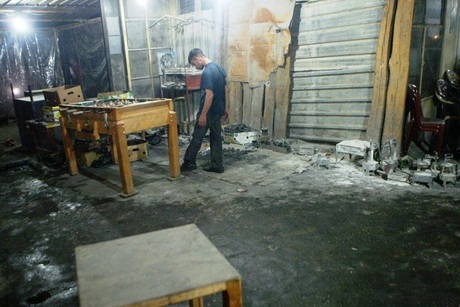 It is not clear whether the cafe was attacked because it was open during fasting hours, but that memo that was approved by Tripoli’s mayor has indirectly contributed to this incident. Having said that, the least Tripoli’s mayor should do is arrest those who threw that grenade the soonest and threaten those who attack cafes of punishment.

Bab al-Tabbaneh is a Sunni Muslim district in Tripoli that has frequently been involved in violence with the residents of neighboring Jabal Mohsen district, whose residents are Alawites — a Shiite Muslim splinter sect. The city as a whole has been affected by the growing presence of religious extremists, especially after the outbreak of conflict in neighboring Syria, with Bab al-Tabbaneh particularly affected.

Wednesday’s attack comes after cafes and restaurants were warned against opening during daylight fasting hours in Ramadan in text messages and on social media in recent days. One such message names establishments staying open, and says “these pigs are selling food and drink during the day and in view of everyone.” It advises people “to deal with them in an appropriate manner,” without specifying further. [Naharnet]