A 12 year old gets beaten up brutally by his teacher and his classmates and the excuse given by the school’s principal is that such incidents happen everywhere in Lebanon. How about I group a bunch of guys and go discipline the teacher and the principal and pretend that it’s not a big deal? How would they like that?

Let’s wait and see what the Minister of Education Hassan Diab has to say about that.

A teacher in the northern city of Tripoli has beaten up a student in a brutal way with the aim of “disciplining” him, a media report said on Tuesday.

“The teacher A. Kh. of the state-run Disciplinary School in Tripoli’s el-Mina has asked students to brutally beat up their classmate Elie Kh,” LBCI television reported.

The student was “slapped on the neck with the aim of disciplining,” LBCI added. [Naharnet] 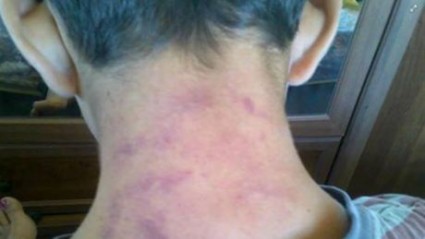 See Also:What is The Role Of The Lebanese Atomic Energy Commission?
Posted By Najib
Categories CRITIQUES,LEBANON