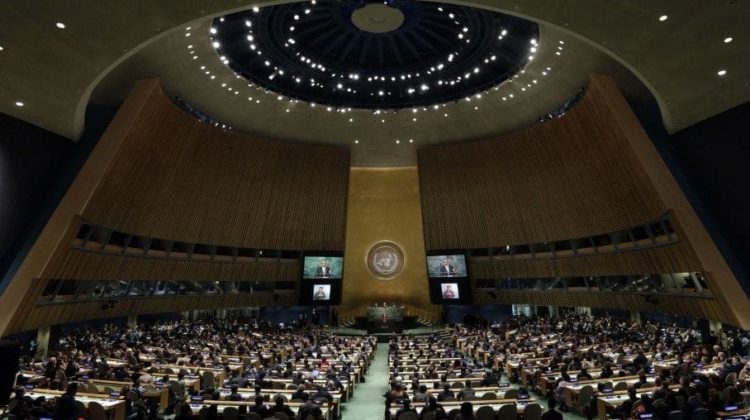 The United Nations General Assembly voted on Monday in favor of a resolution endorsing Lebanese President Michel Aoun’s initiative to establish the Academy for Human Encounters and Dialogue in Lebanon. Aoun had submitted the proposal a year ago at the U.N HQ in New York and got 165 votes in favor, while Israel & the US voted against it.

The Academy is aimed at adopting preventive diplomacy to avoid conflicts and would serve as an alternative to wars and means of establishing peace and restoring rights, according to the President. Obviously, we should all welcome initiatives to prevent wars and promote dialogue, but that’s not something this Academy or any other can help make happen. Nevertheless, I hope Lebanese youth will be exposed to such thoughts and stop cheering for new wars on every corner.

You can check out the official UN draft on this matter [Link].

Convinced that the promotion of cultural pluralism and tolerance towards and dialogue among various cultures and civilizations would contribute to the efforts of all peoples and nations to enrich their cultures and traditions through engagement in a mutually beneficial exchange of knowledge and intellectual, moral and material achievements,

Bearing in mind the positive potential of dialogue initiatives at the national, regional and international levels to make a valuable contribution to improved awareness and understanding of the common values shared by all humankind,

Expressing its appreciation to the President of Lebanon for his efforts to strengthen the role of Lebanon as a centre of dialogue and diversity, in particular through his initiative to establish the Academy for Human Encounters and Dialogue,
1. Welcomes the initiative by the President of Lebanon to establish the Academy for Human Encounters and Dialogue in Beirut;
2. Encourages the Secretary-General, the United Nations Educational, Scientific and Cultural Organization and other relevant specialized agencies to support, within existing resources and in accordance with their respective mandates, the efforts to establish the Academy;
3. Requests the Secretary-General to keep the General Assembly informed of the implementation of the present resolution.