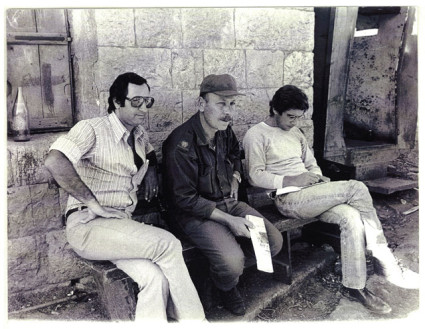 From Right To Left the author, Saad Haddad, and Haddad’s Israeli minder, at Haddad’s headquarters a couple of months before the kidnapping

The author is telling the story of an Israeli-backed militiaman and murderer who kidnapped him in Lebanon back in the 1980s and ended up selling ice cream to children in Detroit. Quite an intriguing story. Read it all [Here].

Thirty-four years ago, on April 18, 1980, I was with a United Nations Peacekeeping patrol that was abducted in south Lebanon. The kidnappers released me after a couple hours, but they tortured and killed two Irish UN peacekeepers who had accompanied me at the time of the abduction: Private Derek Smallhorne, 31, a father of three, and Private Thomas Barrett, 29, who had a baby daughter in Ireland. They tortured and shot a third Irishman, Private John O’Mahony. US Major Harry Klein, an American officer working for the UN, and I carried O’Mahony out of harm’s way. He lived.

“You guys know that the killer, or at least the man who abducted us, is living in Detroit, driving an ice cream truck, right?” I asked, genuinely hoping that in this day and age of information technology, my previous interviews with officials about the matter had been recorded and filed away somewhere.

“Yes, we know that, and he has applied for US citizenship,” Kao said. He said Homeland had determined that the mastermind behind the kidnapping, Mahmoud Bazzi, had entered the United States illegally with falsified papers. He was granted political asylum, then a green card, and now wanted to become an American citizen.

That was news to me. The last time I had heard anything about Bazzi was 2006 in Washington, DC, where I had been called to give my deposition to the Department of Justice. DOJ investigators came to see me after the Irish television network RTE’s program Prime Time aired a detailed one-hour special titled The Enclave of Killings about the 20th anniversary of the ugly incident in Lebanon in April 2000. The assassination of the Irishmen was, of course, big news in Ireland and the lead story in the New York Times on April 19, 1980. Historically, very few Irishmen have died in foreign wars.

See Also:Lebanon Through The Eyes Of Ali Rafei
Posted By Najib
Categories BEIRUT,INFORMATION,LEBANON