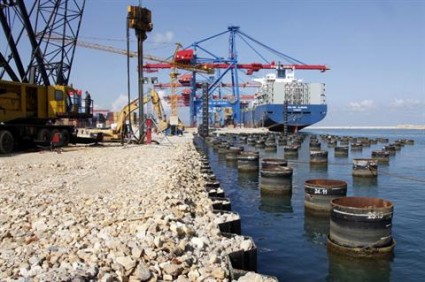 I was surprised to read about “phenomenal growth” and “Beirut Port among the the world’s biggest 100 international portsâ€ in the DailyStar, especially when I’ve been hearing the complete opposite from business owners and economic reports.

Here are few excerpts from the DailyStar article:

Zakhour expressed high optimism about the growth prospects in the portâ€™s operations saying that its business is being propelled by massive growth in transshipment that exceeded 27 percent in the first 10 months of 2011 alone, contributing some 405,000 containers.

The turmoil in neighboring Syria would not negatively affect the port, he added, but in fact may well contribute to increasing its activities.

I don’t know who Elie Zakhour, head of the Beirut International Chamber of Navigation, is trying to fool by these numbers as they are inaccurate. It’s good to be optimistic but it’s better if he gives the whole image to the Lebanese.

Here’s an excerpt of Lebanon’s Economic Report for Q3 2011 prepared by Bank Audi, in regards to Beirut Port activity:

As you can see, Beirut Port’s activity has slowed down and revenues are down, despite a surge in transshipments mainly due to the situation in Syria. All in all, Beirut Port is not doing that bad in spite of the recent events in the Arab world and the economic recession in Europe, but its growth has slowed down when compared to last year.