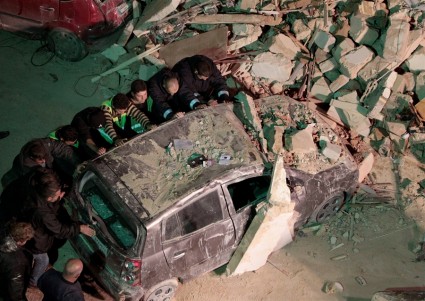 What happened yesterday in Achrafieh was another tragic incident that showed the lack of responsibility of officials, the unpreparedness of the security forces and rescue teams but also the lack of accountability towards the people we vote for.

Everytime a building collapses, we are told that there were previous warnings and everyone knew. Take a walk around Achrafieh and most Lebanese areas and you will see there are tons of buildings that could collapse any second now.

Some are blaming the old buildings’ owners, others are pointing at the government, but the truth is Lebanese are becoming very negligent and taking a nonchalant and passive attitude towards all issues.

We cannot blame the building’s residents but had they been warned, why didn’t anyone take an initiative to move them out?

– Had the building owner warned local MPs, ministers, mayors and officials or even the media, I am sure someone would have reacted.

– If the buildings’ residents are poor and don’t have money, they or their families could have raised the issue to local MPs or municipalities and many NGOs and associations. They could have also helped them relocate. Unfortunately, one resident was moving out with the help of some family members but it was too late as the building collapsed.

I am not trying to point fingers at anyone here, but rather urge Lebanese to raise their voices whenever their lives are endangered and draw attention before it’s too late. There’s no use in yelling and cursing officials and politicians when the tragedy occurs as this will never bring back the dead.

Having said all that, I urge all building owners and residents to warn the authorities of any old or new building in a bad shape and make sure their voices are heard by all means possible because Lebanon is not ready for more tragedies like this one.

Last but not least, our prayers go to the victims’ families and to those still stuck under the rubble.