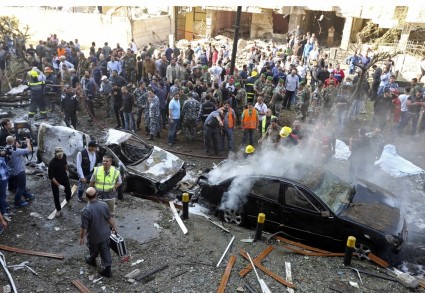 Whenever an explosion takes places in Lebanon, and unfortunately there’s been way too many this year, people tend to react the wrong way by rushing towards the bombsite. Even though the intention is to help the victims and take them to the nearest hospital, such a reaction could be life-threatening specially when a second event occurs.

This is exactly what happened outside the Iranian Embassy in Beirut few days ago, when the first suicide bomber detonated his explosive belt at the embassy’s entrance only to be followed few minutes later by a second explosion caused by another bomber detonating his 60KG explosives-rigged Trail Blazer.

Here’s a list of guidelines that should be followed whenever an explosion takes places, as communicated by the Red Cross in Lebanon and based on some online findings:

If you are near the bombing:
– Leave the area immediately. Stay Alert and Away from the bombsite as one event can be followed by another.
– Avoid crowds. Crowds of people may be targeted for a second attack.
– Avoid unattended cars and trucks as they may contain explosives.
– Stay away from damaged buildings to avoid falling glass and bricks.
– Clear the way for rescue units and security forces.
– Wait for the Red Cross and the Civil Defense units to evacuate the victims. Some of them can be treated on the spot and don’t require moving to a hospital.
– Stay away from the crime scene as walking around it could jeopardize the collection and preservation of evidence.

If you are inside a building:
– Stay away from windows, mirrors, overhead fixtures, filing cabinets, bookcases, and electrical equipment. Instead go to a safe room and hide properly.
– Don’t step out on the balcony.
– Keep the fire extinguisher next to you just in case a fire erupts.
– Open doors carefully; Watch for falling objects.
– Do not use elevators.