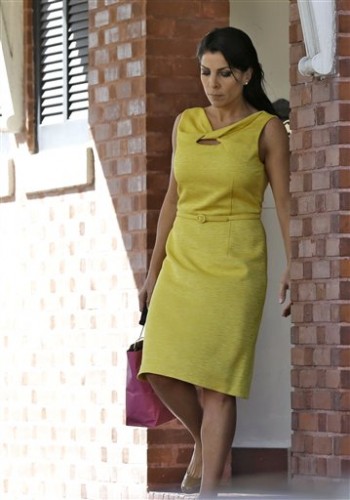 The David Patreus scandal is on the front page of every newspaper and website in the U.S and Jill Kelley has become the “central figure in the growing scandal that’s ensnared high-ranking officials at the CIA and the Pentagon“. Some websites even want to know who designs her exquisite dresses now.

As I had mentioned earlier, Jill Kelley hails from a Lebanese family (Khawan) that emigrated to Philadelphia in the 1970s. She worked as an unpaid social liaison to MacDill Air Force Base in Tampa and used to host events at her million-dollar Bayshore Boulevard home. Jill & her husband Dr. Scott Kelley were good friends of the Patreus family. She has a twin sister Nathalie, an older sister Caroline and a brother called David Khawam. This is what he had to say when interviewed about his sister:

So far, there hasn’t been any proof showing that Jill was Patreus’ second love, but the investigation that followed reveleaded some flirtatious emails between her and another U.S General, John Allen, commander of the International Security Assistance Force in Afghanistan.

See Also:Photoshop Your Hair Out In No Time!
Posted By Najib
Categories HUMOR,INFORMATION,LEBANON,LIFESTYLE