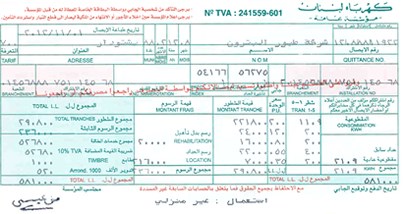 Last week, a couple of friends were complaining that their electricity bills have doubled recently even though they were on vacation and didn’t stay home much. The first thing I told them was that electricity bills are always higher during the summer because of the air conditioning but then I saw the below video on Facebook which made me rethink about all the hefty bills I used to pay.

To sum it up quickly, EDL collectors pass by usually every two months and stick the electricity bill on your front door. In June 2019 for example, you get the bill for Jan and Feb 2019 with the total Nbr of kWh consumed, which is charged based on several ranges. The lower the consumption, the cheaper the cost of kWh per hour is.

Now here’s the trick: Collectors have to read the meter which is usually installed in the electric room and write it down on their systems to generate the bills. In the video below, the guy had spent 250 kWh during Jan and Feb, but the collector wrote them down as 50. During March & April, he did the same so the guy was getting charged at the lowest rate but had around 400 kWh unaccounted for. In the May-June bill, the collector added the “missing” 400 kWh to the existing consumption, which caused the bill to be three times higher than the usual ones (high consumption –> highest price per kWh range).

What to do? The best way to avoid this from happening is installing a meter inside your house and keeping track of the kWhs consumed on a monthly basis vs. those marked on the EDL meter. That way, when the bill comes, you can verify the real consumption versus what the collector wrote down. Obviously, the right thing would be for EDL to fire these collectors for manipulating the bills and setting up automated monthly bill payments that read directly from the source.