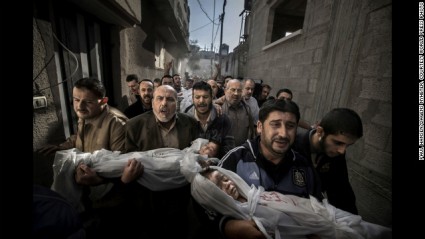 Suhaib Hijazi, 2, and his brother, Muhammad, 3, were killed when an Israeli airstrike struck their Gaza City house. Winning Picture by photographer Paul Hansen

This year’s Photo of the Year, taken by Paul Hansen, is a striking image of the bodies of two young children carried through the streets of Gaza City after an Israeli airstrike on their home, the photographer said. They are being taken to a mosque for burial, their father’s body carried on a stretcher behind them. Their mother was hospitalized. [CNN]

You can check other great pictures selected [Here].