This whole Valet Parking thing is seriously getting out of hand day after day and the first ones to blame are the companies and restaurants hiring them.

If Zaatar wou Zeit cares that much about its customer service, they should hire their own people to park the cars and fire the “VIP” valet parking company they just hired in ZWZ Kaslik and I suppose elsewhere.

It’s not enough that we have to deal with ever increasing prices [Link1] [Link2], we also have to bare the arrogance and impoliteness of some valet parking guys.

To cut the story short, I passed by ZWZ Kaslik yesterday to meet my brother and there were 3 empty spots in front of it. The Valet guy had put his sign in a way that keeps me from parking properly but I still managed to park the car.

Once I stepped down my vehicle, he came out of nowhere and asked me for the keys (“Badde el mfetee7 blease”). I told him that the car is parked fine, so he answered that it’s not and I HAVE to give him the keys. I still insisted the car is fine and told him I can change it by myself if he wants to and so I did even though he barely moved his sign and kept giving me the looks as if I stole something from him.

Since the ZWZ people apparently read our blog, and since we all love ZWZ despite its insanely expensive man2ouches, I urge them to take action as soon as possible and train their own employees to park the cars or get decent parking space, instead of hiring retired military men to do the job.

Valet Parking should be optional and Valet guys should be well trained and well dressed and the least polite and courteous. 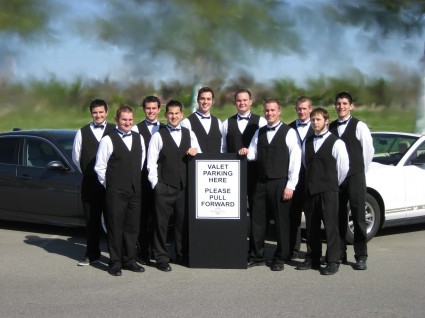 Here’s how valet parkings should look like, anywhere you go and if you think they are too fancy, then maybe ZWZ should not have Valet Parking in the first place. After all, it’s a freaking man2ouche place and not an intercontinental hotel.