[YouTube] – Leb Elections – A single detail can prevent you from voting

Elections are coming soon and the Ministry of Interior has launched a campaign asking all potential voters to verify their information and make sure all is in order. In order to do so, one has to visit the website [www.dgps.gov.lb] and verify his information.

That’s a very good initiative but funnily enough, it seems the problem is not really in people being unable to vote but in those who should are eligible to do so yet voted. In fact and according to Minister Charbel, there were 12,015 Lebanese who voted illegally in 2009. 12,015!!!

Who is not eligible to vote?
• Persons deprived by legal sentence of their civil rights
• Persons convicted to be permanently disqualified from public service at any grades or positions
• Persons disqualified from their grades or public service temporarily, until the end of the disqualification period
• Persons convicted of a felony
• Persons convicted of one of the following major offences: burglary, fraud, issuing of uncovered checks, breach of trust, misappropriation of funds, bribery, perjury, rape, intimidation, falsification, forgery, false testimony, immoral crimes as stated in the seventh chapter of the penal code, and crimes related to the planting, production and/or trade in illicit drugs
• Persons interdicted by court order until the end of the interdiction period
• Persons declared fraudulently bankrupt or those sentenced to sanctions stated in Articles 689 to 698 of the Penal Code
• Persons convicted and sentenced to sanctions stated in Articles 329 to 334 of the penal code
• Naturalized Lebanese individuals before the lapse of ten years after the naturalization decree is issued.
• Military personnel of various ranks 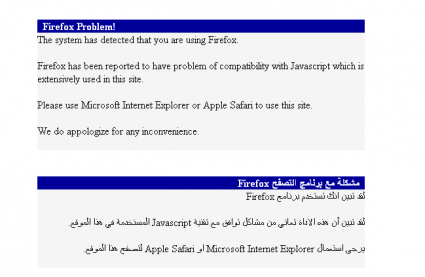 Interior Ministry wants me to use IE – Blasphemy!