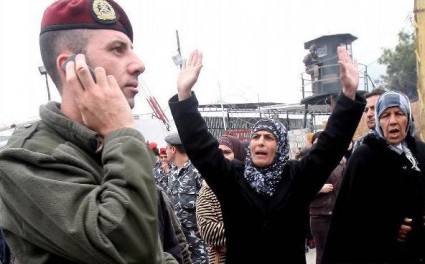 I would understand finding mobile phones, drugs, laptops maybe, knives and other sharp items inside few prison cells, but how the hell do you sneak in a 62 Inch TV inside a prison? Honestly I don’t see a reason why those prisoners are asking for their release from Roumieh. They do whatever they want, leave whenever they find it suitable, buy mobile phones, laptops, knives, weapons, 60-inch TVs, have internet access and are never bothered by the guards.

I wonder what’s really bothering them? The food maybe? Kababji doesn’t deliver there?

The military court wrapped up on Tuesday investigations in the Roumieh prison break carried out by three Fatah al-Islam inmates with the number of detained security guards reaching 13, reported the National News Agency. Voice of Lebanon radio (93.3) reported on Tuesday that the “flawed situation” included the inmates’ possession of a 62 inch flat-screen television and internet access that allowed them contact with extremists from all over the world. [Naharnet]