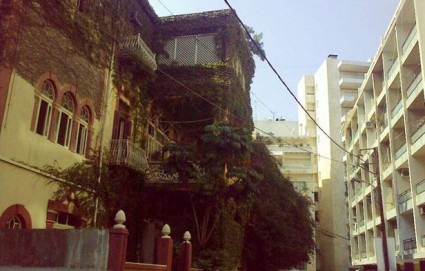 Skyscrapers, malls and Shisha cafes are our new identity.

The cars are parked in a line adjacent to Ottoman and French-style buildings in Beirut’s Martyrs Square. A tramway surrounds the square, and people walk along the wide sidewalk of Foch Avenue. This is how downtown Beirut looked in the first decades of the last century, now preserved only in old pictures.

“My grandfather suppresses a tear when passing by what used to be Martyrs Square and the adjacent souqs,” says Pascale Ingea, from the Association for the Protection of Lebanese Heritage (APLH).

Lebanon’s post-war period has seen the destruction of most of the buildings that made Beirut the Paris of the Middle East. “This kills our identity,” she adds.

During the 1990s, the Ministry of Culture put together a list of historical landmarks in the country. The Direction Générale des Antiquités (DGA) included approximately 1,600 buildings in Beirut, most of them from the Ottoman period or the French mandate.

As of this year, 80 percent of the buildings on the list have been demolished, say representatives from both APLH and Save Beirut Heritage (SBH). There are many reasons for the mass destruction of heritage buildings, but the two associations cite the lack of enforcement of the heritage law by successive Lebanese governments out of corruption and lack of interest, as well as non-existent construction regulation. They also note that the DGA’s budget of around $3 million represents less than 0.02% of annual government spending. [NowLebanon]