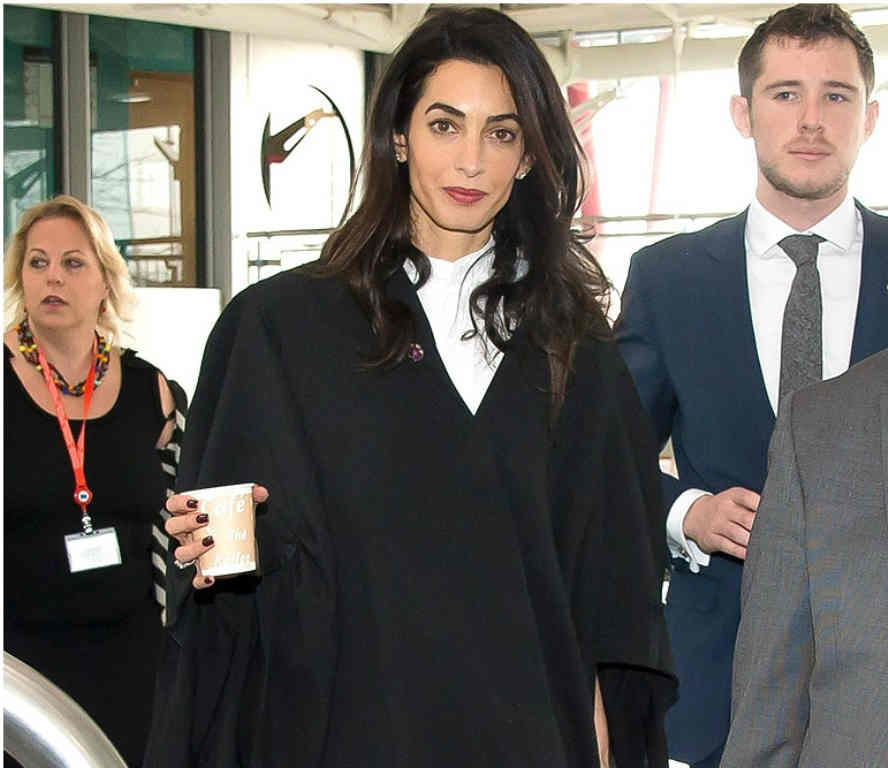 Amal Clooney is taking on her next big case, which is representing Armenia’s interests in a historic trial before the European Court of Human Rights in Strasbourg, France. The case is an appeal of a 2013 ruling by the Supreme Court of Europe, in which the court decided that a Swiss law prohibiting the public denial of the Armenian genocide is a violation of freedom of speech. Clooney will attempt to refute testimony from countries like Turkey who still deny the genocide that was committed by the Ottoman Empire between 1915 and 1923 and that caused the death of 1.5 million Armenians. Amal was recently representing the 3 Al-Jazeera journalists arrested in Egypt and risked arrest for her positions.

This year marks the 100th anniversary of the Armenian Genocide and it’s about time Turkey recognizes the genocide and pays for its crimes!

Here’s the full transcript of the first court session taken from the Telegraph:

Amal Clooney, the human rights barrister, has accused Turkey of double standards on freedom of expression for defending a Turkish Leftist who described the Armenian genocide an “international lie”.
Mrs Clooney, who is representing Armenia on behalf of Doughty Street Chambers along with Geoffrey Robertson QC, said Turkey’s stance was hypocritical “because of its disgraceful record on freedom of expression”, including prosecutions of Turkish-Armenians who campaign for the1915 massacres to be called a genocide.
She took on the case against Doğu Perinçek, chairman of the Turkish Workers’ Party and an MP, who was found guilty of genocide denial and racial discrimination in Switzerland in 2007, but had his conviction overturned by the European Court of Human Rights (ECHR) after being defended by Turkey’s government.
The ECHR upheld his right to question in a “debate of clear public interest” and questioned if it was possible to define as a genocide, a policy of deliberate extermination, the massacres and deportations of Armenians by the Turks a century ago.
The human rights lawyer, who married George Clooney her Hollywood film star husband last September, accused the Strasbourg’s court’s human rights judges of being “simply wrong”.
“It cast doubt doubt of the reality of genocide that Armenian people suffered a century ago,” she said
“Armenia must have its day in court. The stakes could not be higher for the Armenian people.”
Switzerland has laws against the denial of all genocide as part of its anti-racism laws but the ECHR ruled that Mr Perinçek’s right to freedom of speech was violated when he was convicted as a criminal by a Swiss court for his claims.
In a December 2013 judgement, the European court concluded that there was not a “general consensus” that the massacres of Armenians had constituted genocide and that only 20 countries out of 190 worldwide classed it as such.
Only three European countries, Greece, Slovakia and Switzerland, ban the Armenian genocide denial. A French law was overturned on free speech grounds in the country’s constitutional court three years ago.
Speaking in Lausanne in 2005, Mr Perinçek had said that the legal definition of Armenian genocide was an “international lie”, but did not dispute that the killings and deportations had taken place.
Four and half minutes into her evidence of the historical record concerning events in 1915, including Ottoman Empire admissions of war crimes, the barrister was asked to conclude by the judges.
“Mrs Clooney may I draw your attention to the fact that the Armenian government has gone over the time allocated, so I ask you to conclude,” said Dean Spielmann, the president of the court.
She went on to insist that Armenia did not want to limit free speech or historical debate and accused Turkey of having double standards because of it’s own poor record on freedom of expression.
“Armenia is not here to argue against freedom of expression anymore than Turkey is here to defend it. This court knows very well how disgraceful Turkey’s record on freedom of expression is,” she said.
“You have found against the Turkish government in 224 separate cases on freedom of expression grounds.”
The Lebanese lawyer made a reference to Hrant Dink, the Turkish-Armenian newspaper editor, who was prosecuted by Turkey for arguing that the 1915 massacres were genocide.
Mr Dink was then assassinated by a Turkish nationalist in 2007 for his views and ethnicity as an Armenian.
“Armenia has every interest in ensuring that its own citizens do not get caught in a net that criminalises speech too broadly. As the family of Hrant Dink know about all too well,” she said.
In his evidence to the court, Mr Perinçek denied any motivation to incite hatred against Armenians, telling judges that he had been imprisoned for speaking up for one of Turkey’s other ethnic minorities, the Kurds.
“We are here for the liberty of Europeans,” he said. “Liberty for those who criticise the established status quo.
“I share the pain of Armenian citizens, you can not find a word of mine that expresses antagonism against them. I hold the great powers responsible for what happened in 1915. There should be no taboos for the right to speak.”
His arguments were dismissed by Armenia’s legal team which was supporting Switzerland in defending the “unshakable” conviction.
Geoffrey Robertson QC accused Mr Perincek of being an admirer of Talaat Pasha, one of the organisers of the Armenian genocide, a man he said was the “Ottoman’s Empire’s Hitler”.
Mr Robertson argued that the Turkish Left-wing nationalist had travelled Europe deliberately trying to provoke a conviction for genocide denial in order to “arouse his supporters in Turkey”.
“It was made by a man who only came to Switzerland in order to be convicted. That was his purpose. He went to Germany, France, at the end of the day he tried to go Greece to expostulate but was turned away. He is genocide denier forum shopper,” he said.
“He is an incurable genocide denier, a criminal and a vexatious litigant.”
Asked by the Telegraph about fevered speculation about what she would be wearing for the court appearance, Mrs Clooney laughed and pointed to her black barrister’s robes.
“I’m wearing Ede and Ravenscroft,” she joked, in a reference to the famous English company of legal robe makers and tailors since 1689.
Mr Robertson said he was was surprised at the rows of photographers when legal teams entered the court, which does not generally excite press attention or attract packs of photographers.
He said he was pleased that coverage of the case would focus attention on Mrs Clooney’s career as a lawyer rather than her private life as the wife of a film celebrity, Hollywood actor and director.
“It is not about white gloves or yachts. It puts the record straight, she is a human rights lawyer,” he said.