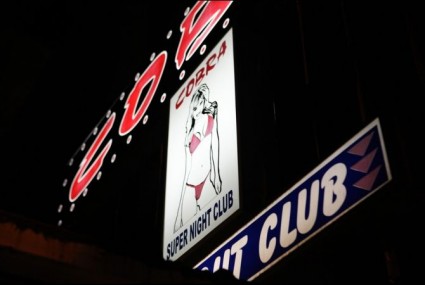 I laughed when I read that the young man who approached her first is studying medicine at the Kyiv Medical University. I wonder what he will specialize in later on? Gynecology maybe?

Tatyana was a single mom working as a waitress, struggling to raise her two year-old son after her boyfriend left when he was born. One day, a young man approached her in a bar, and asked if she’d like to make good money in a “safe and quick” way. The young man was Lebanese and studying medicine at the Kyiv Medical University. He told Tatyana that he could get her a six-month visa to work as a dancer in Lebanon. His uncle, he said, owned a cabaret there, and he was looking for new dancers for the nightly show. Tatyana accepted. Soon though, it became evident to her that she was being recruited for prostitution. “I didn’t mind. I was sleeping all the time with Ukrainian jerks that disappeared as soon as they had their way with me. So why not make some cash out of it?” Her contact in Lebanon was a man called Abu Bilal. Once she arrived to Lebanon, she only met him once. “He seemed nice and caring, he warned us about never sleeping with men without condoms and stuff like that.”

You can buy Tatyana for $400 USD a night. Don’t be offended by the word ‘buy’ – she uses it herself, in a very down-to-earth manner. “I am lucky to be worth $400 in such a competitive environment. Many of the other girls are bought for $200 or even less,” she says with a hint of… is it pride?! Yes, pride indeed. Tatyana, just like her friends Olga and Yulia, is from Ukraine. She entered Lebanon four months ago with an artist visa, an inventive scheme that the Lebanese authorities use to avoid admitting that they allow prostitution. General Security closely monitors the ‘artists.’ Their residency permits do not exceed six months, and they are deported if they are caught overstaying their permits.