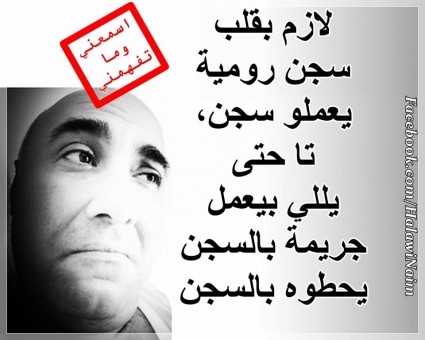 In case you missed the last scandal at the Roumieh Prison, here’s a brief summary of what happened:

Roumieh Prison inmate G. al-Qandaqli was beaten to death and strangled by other inmates after he uncovered a detailed scheme to escape the prison. Three prison guards were rewarded for foiling the attempt and State Commissioner to the Military Court Judge Saqr Saqr charged five members of Fatah al-Islam for al-Qandaqli’s murder.

However and here’s the funny part, Islamist inmates refused to hand over two of the killers to the security forces and started negotiating with them. Is it so hard for the army forces to storm the prison and capture them? Is it acceptable to negotiate with criminals? Of course not but it’s pointless to talk about this, so it’s better if we just laugh about it like Naim Halawi is.

Come to think of it, had the Prison Break creators done some research on Roumieh Prison, they would have easily come up with 10 extra seasons.