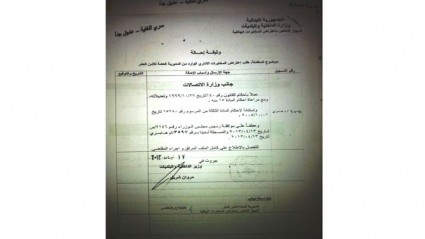 Update: The General Security denied the allegations stated in Annahar’s article and said it didn’t have access to any data (Source: VOL).

Update2: Since February 2013, the Prime Minister can accept giving the Data to any security agency at his own discretion [Source]. The criteria set out by the law which requires judges’ prior approval and execution by Minister of Communication was waived as per request from President Sleiman. Nowadays, even ISF is receiving such Data and not only General Security (Annahar’s info is partially true but fully unprofessional). Thank you Razor!

An-Nahar Daily said on Monday that the General Security apparatus is receiving the telecommunications’ data that it needs upon the approval of Caretaker Prime Minister Najib Mikati and Interior Minister Marwan Charbel.

According to An-Nahar newspaper, General Security Chief Major General Abbas Ibrahim sent more than one memorandum to the interior ministry and received immediate approvals from PM Mikati and Minister Charbel “who did not take into account the freedom and privacy of citizens”. [LBC]

According to Annahar’s article, The General Security have repeatedly requested access to the telecoms data of the entire population for many Lebanese areas and got an approval for it.

I don’t know where Telecom Minister Sehnaoui stands from those requests and whether he also gave his approval or if it was required (I think he has to approve), but this goes against the campaign he led himself few months back in the name of privacy and personal freedom. I wish the author of the article provided further explanation and details rather than politicize the whole matter as the problem is much bigger than such considerations.

In all cases, I am almost positive all the legal and illegal parties have access in a way or another to our data but this remains nonetheless a very serious issue as we should never compromise our freedom in the name of security.

Here’s my original post on the Freedom vs. Security back when the Information Branch requested data from the Telecom Ministry and the government and got denied any access.

See Also:Say no To the Dolphin Show!
Posted By Najib
Categories CRITIQUES,INFORMATION,LEBANON