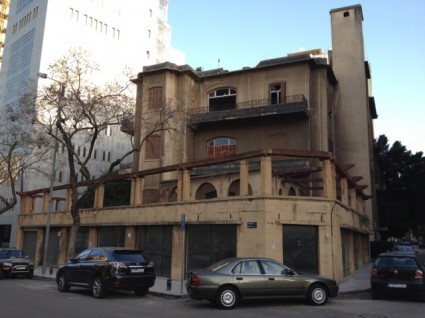 The residence of the author of The Rock of Tanios and the first Lebanese to become a member of the presitigious “l’Academie Francaise” will probably be demolished in the next few days. The Maalouf family had moved into the building, located in the Badaro area, around 1961 and occupied the second floor apartment. Amin Maalouf spent his formative years in the home from the age of 12 to 22. [Source]

Amin Maalouf’s 91-year-old mother was the last of the family to reside in the home. She packed everything up late last year after losing a number of legal battles to the owners and developers. From what I’ve read and heard, the Lebanese Ministry of Culture didn’t do much to help the Maalouf family keep their residence.

According to the Beirut Report, Kettaneh group, the construction firm behind this new tower, had proposed a sort of monument for Amine Maalouf to be incorporated into the tower’s new structure, but it was rejected by the family representative who argued that “the Maalouf home, an ornate 100 year-old garden mansion that gave birth to the career of one of Lebanon’s greatest writers, should be preserved”.

I have nothing against building new skyscrapers and modern buildings, but it doesn’t mean one has to demolish landmarks and destroy Beirut’s past to do so. I cannot really blame the construction firms looking for new investments, but the concerned ministry and Lebanese authorities for not making any effort to preserve that house and other monuments.