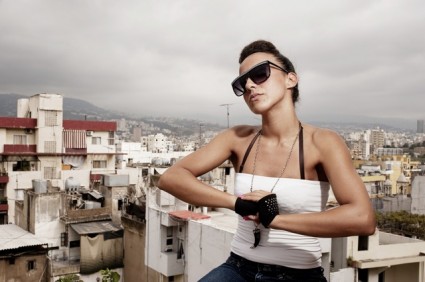 Arab artists, including Marwan Abado, Syrian singer Lena Chamamyan, Lebanese MC Malikah, and Palestine’s DJ Sotusura and MC Boikutt pulled out in the past two days of Austria’s Salam.Orient 2012 music festival because of sponsorship from the Israeli Embassy. Malikah justified her withdrawal by saying:

“”I cannot participate in an event sponsored by a Colonial Occupying Force, especially when the occupied subject is us!!”

With all due respect to Malikah and other Arab Artists, but their decision to pull out doesn’t add up. If you want to boycott Israel and Zionism, you boycott any event including an Israeli and not just one sponsored by Israel. The festival’s schedule clearly listed all participants, including the Israeli band Buchara Groove, so they should have all withdrawn from the start!

Added to that, if they had asked for a clarification from the organizers, they would have understood the reason behind this sponsorship. As shown below, the sponsorship came for one performance and has nothing to do with the event as a whole. In fact, the same happened in 2011 with an Indian band.

“In 2012 Vienna Acts also invited a group from Tajikistan living in Israel to present a music program called “Buchara Groove.” For this evening – and only for this performance – we asked the Embassy of Israel for financial support to cover local cost (meals and hotel) which they agreed to cover. For this reason, the logo of the Israeli embassy is displayed on our website (alongside all other sponsors). Besides this, the Embassy of Israel has no influence on the programmation or content of Salam.Orient.” [Source]

All in all, it doesn’t look like those baseless boycotts are going to end anytime soon. You’d think Arab Artists would make use of their talents to show support to Palestine through songs or plays or acts but instead they insist on doing it the wrong way.