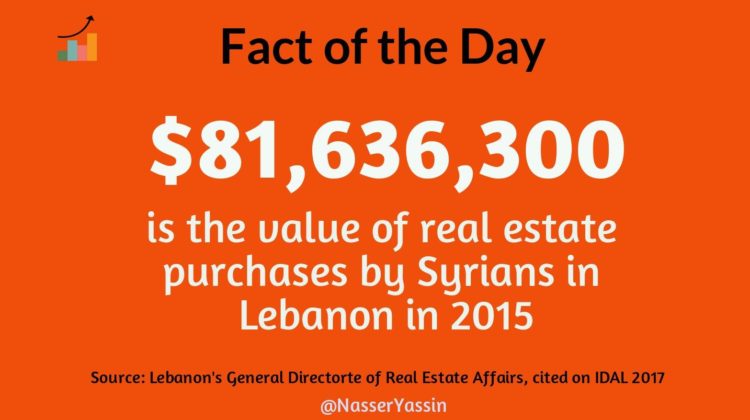 AUB professor and Director of Research at the Issam Fares Institute for Public Policy and International Affairs Dr. Nasser Yassin is addressing the Syrian refugee crisis with facts, as part of the #AUB4Refugees initiative. The aim is to counter the current rhetoric surrounding refugees with facts and figures.

Dr. Yassin launched for that sake a series of tweets showing the positive impacts of Syrian refugees in Lebanon. For example:

– $378 Million is the total amount paid in 2016 by Syrian refugees for renting houses
– 84.1% of new businesses established near Syrian refugee settlements in Lebanon in 2011-2014 were owned by Lebanese
– More than 22 million USD are spent monthly on food by #Syrian #refugees in #Lebanon through the cash for food e-card program #AUB4Refugees
– In 2015, #Syrians had the largest portion of real estate acquisitions by foreigners in #Lebanon (14.87%). Saudis came second with 13.62%

Does that mean we should be happy about the current situation? Definitely not but to claim that refugees are to blame for our economic and security woes is wrong. In fact, the Lebanese authorities are the only ones to blame for mismanaging the Syrian crisis from the start and for refusing to form camps, create safe pathways for refugees, making sure all refugees are accounted for and the list goes on …

I’m gonna quote my friend Jessica on this matter because she summed it up perfectly in a recent FB post: