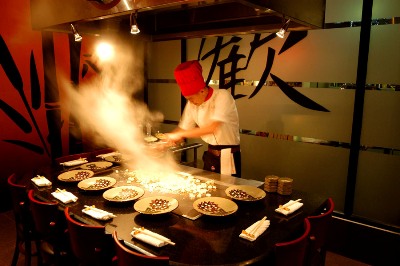 As you probably read or heard, Mark who posts here on BlogBaladi and is behind the 248am blog in Kuwait is being sued for sharing his experience at Benihana online and critisizing few things.

This issue has attracted a LOT of attention in the Middle East and even worldwide, to the extent that Benihana Inc. had to issue a PR to isolate itself from the incident.

Having said that, I believe it is extremly important that Mark win this case or that Benihana people get back to their senses and drop the case because it will affect blogs and bloggers not just in Kuwait but in the whole Middle East.

Imagine thinking twice and taking the necessary precautions everytime you want to critisize a restaurant that served bad food. This is absurd and unacceptable by all standards. Of course, this does not mean there shouldn’t be certain standards for bloggers when posting, but what is being challenged here is the simple fact of expressing one’s discontent about his/her experience at a certain place.

I’ve had myself many bad experiences at restaurants in Lebanon which I shared online and instead of receiving lawsuits, had impressive and unexpected feedbacks from the restaurants’ managers and staff members.

This is how you gain people’s trust and you enhance your image to the public, by caring about every customer and handling every comment you get, not by issuing lawsuits for people who don’t like your food.

Last but not least, I believe a lawsuit should be issued by Lebanese bloggers against Benihana for stereotyping when they assumed for some reason that Mark was a Lebanese and asked him if he was so.

What does that even mean? So what if he is Lebanese? He’s a bad person?

Until now, the lawsuit is still on and it might take some time before we have a verdict, or before whomever issued that lawsuit drops it and realizes the damage he’s done.