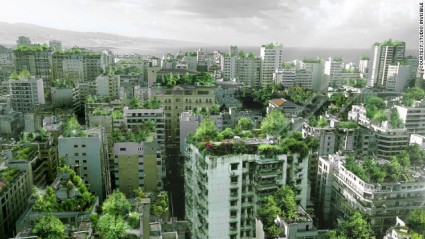 “Aside from the major environmental and social benefits, it would also be incredibly iconic,” he says. “Just imagine: The world’s first rooftop garden city. [CNN] “

It’s good to see that Beirut’s hanging gardens have made it to the CNN website, maybe this will incite few Lebanese or NGOs outside to finance the project.

The total cost of the project is estimated at $3.5-4 million, which is honestly nothing compared to the benefits offered by this initiative. Given this fact, I don’t understand why none of our Lebanese billionaires has agreed to finance the project yet.

I think Wassim Melki, the architect behind this idea, should meet with Beirut’s municipality and key political figures and businessmen in Beirut, and not just rely on NGOs for the moment. There are a lot of parties that will be interested in financing such an initiative for their own sake and for the people’s sake.