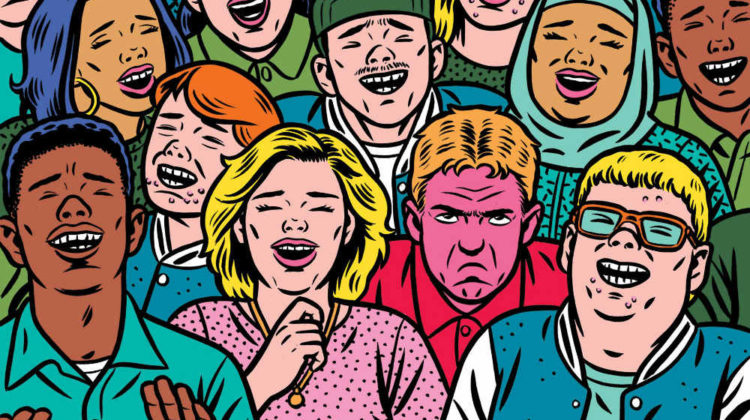 I’m becoming more and more convinced that Lebanese can no longer take a joke these days. No matter how offensive or lame the joke is, someone will figure out a way to make a fuss out of it and dramatize it. Yesterday our president had a slip of the tongue which turned into memes and jokes within seconds online, a matter that upset his supporters of course. Instead of ignoring the whole thing, some TVs seemingly edited the video to make it sound like there wasn’t any slip of the tongue and broadcasted it again to make the president look good, which pretty much made things worse.

Few weeks back, some guy made a really bad joke about Saint Charbel and as a result, got beaten up, interrogated and fired from his job. I didn’t find his joke funny and I usually find people who make such offensive jokes obnoxious but how most people reacted to the joke was far worse than the joke itself, especially if the aim was to defend their faith. File a lawsuit against the guy for all I care, but what’s the point of beating him up?? What purpose does it serve? When the Charlie Hebdo scandal took place years ago, the majority here stood in solidarity and abused the #JeSuisCharlie hashtag. How is that different now? Why turn violent against an offensive joke rather take legal measures (if applicable) and be civilized about it?

These are two incidents out of many and the sad reality is that everyone is offended by everything nowadays in Lebanon and no one can take a joke anymore. It’s like we’re all suffering from Gelotophobia and feel we’re being laughed at all time. If someone mocks our political leader, we’re offended, if someone mocks our religion leader, we take the streets and burn tires, if someone mocks an artist we love, we bash and curse an artist they love.

Sadly enough, freedom of expression is slowly turning into yet another Lebanese myth as the ongoing suppression of freedom of speech and ever increasing crackdown on social media channels are all within the frameworks of the law and by no means coincidental and here lies the biggest problem. If we still want people to view our country as a beacon of freedom in the region, we need first and foremost our leaders to start accepting criticism and act as role models to their supporters. If someone criticizes them or mocks them online, they should welcome it. I know for a fact that the president and the PM have asked repeatedly not to pursue legal actions against those who bash them, so why can’t their supporters accept that and move on?

More importantly, I invite anyone who is easily offended by any joke to take a moment before unleashing hell on Facebook and understand that by ignoring this joke and whoever is being it, they’re giving them less importance while preserving what matters the most to many Lebanese, their freedom of expression. One example I keep using is how Charlie Hebdo was highly unpopular and about to shut down before the unfortunate attack on the magazine took place. Extremism comes in many shapes and only causes further extremism.

Whenever you read or hear a joke about anyone or anything in Lebanon, keep in mind that we’re living in a country with no electricity, no water, no proper internet, a garbage crisis and the same ruling parties for the past 40 years. If anything, the joke is on us and we need to act on it, instead of wasting so much effort and time on a useless Facebook joke or a drunken tweet.