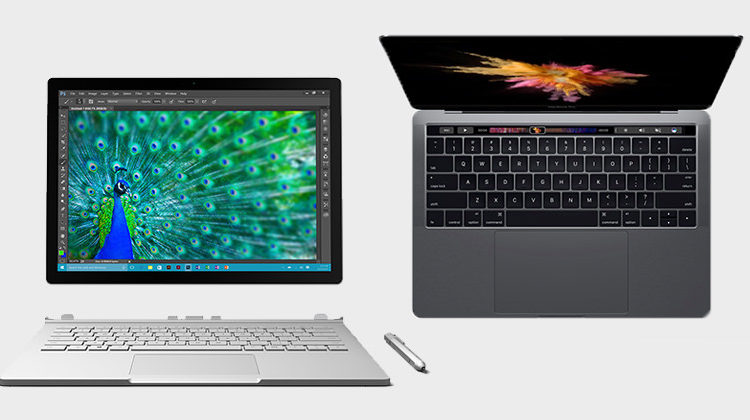 MacBook Pro Overview:
The MacBook Pro was always the ultimate notebook to own, it is one of the most reliable and performing devices in the market. I am one of those people who keeps their machine running 20 hours a day. It is powerful enough to cater for all your needs, whether you are a film-maker, graphic designer, music DJ, writer or a student, this is the ultimate portable device.

Things we didn’t expect to see:
Headphones Jack: Apple removed the headphones jack from the iPhone 7 but kept it on the MacBook Pro. They have put so much effort to promote the uselessness of the jack, then kept it on all other devices.

iPhone 7 connector: If you have purchased an iPhone 7, guess what? You will need another adaptor/cable to hook it up to the new Macbook Pro.

Adaptors: Whatever devices and peripherals you have at home or work, get ready to buy plenty of adaptors to get them working with the new MacBook Pro.

Apple vs Microsoft
I’ve been trying to understand Apple’s strategy when it comes to hardware. Apple has got the technology, the expertise, the team and the means to produce the most kick ass portable device that unites both MacBook and iPad worlds together, like Microsoft did with its Surface Book and Pro.

Why was Microsoft able to release an all in one device? Why is Apple still convincing its fans that the touch screen is useless for notebooks?

Microsoft is relatively new to the hardware game. Their attempt to have a sizable market share in the already saturated smartphone industry has failed. They are not taking risks with tablets or notebooks. Add to that, Microsoft does not have a laptop or tablet in the market to worry about competing with in the first place. They simply gave users what they want, an all in one powerful notebook/tablet experience, challenging both the notebooks and tablets industries.

When the iPad was first released, I was amongst the first adopter. For a good amount of time, I have put my MacBook aside to try and live the rebel life using only iPhone and iPad. Down the line, I came back running for my MacBook Pro realizing that the iPad experience is not yet what I had wished for. The experience starts with a folders and ends with connectivity and productivity.

We’re not killing anything!
Today Apple has a wide array of notebook and tablet to fit the so many lifestyles, budgets and needs. iPad Pro, iPad Air, iPad Mini, MacBook, MacBook Air, MacBook Pro. Do we really need all of these items? Can’t Apple create an all in one portable device?

Apple is still not ready to kill any of its products yet. I guess, in their opinion, the market can still wait for a couple more years before this norm becomes unacceptable.

Looking at the Apple’s new products life cycle we assume that this MacBook Pro is here to stay for at least two more years. Apple could have have added the features we’ve all been waiting for: Touchscreen, detachable keyboard, Pen, expandable storage. Instead they gave us a pleasant sedative called the Touchbar.

Touchdown
The TouchBar was the smartest move that Apple ever did to preserve the longitivtiy of the archaic MacBook Pro. It was like a big dose of morphine for Mac users. It felt so good that we are willing to turn a blind eye on Apple’s intentional delays.

All in all, I am going to give the Surface a try, but I am still going to be the first in line to get the new MacBook Pro. People can be experimental in their choice of smartphones, or with their secondary devices. I have even switched to Android for a while. But when it comes to productivity, the MacBook Pro is still the supreme market leader and Mac users are not ready to let go just yet.