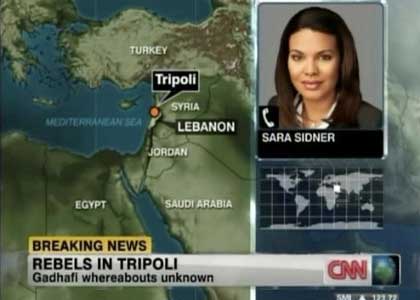 Back in August 2011, CNN was covering the Libyan war against Ghaddafi and showed the map of Tripoli in Lebanon instead of Libya. Of course it went viral and everyone was laughing at the story, but I think we owe CNN an apology today. The reason why I’m saying that is because Tripoli has been at war for more than 3 days now, schools and shops are closed, people are scared yet there’s barely any mention of what’s happening in the Lebanese Media. It’s as if Tripoli is disassociated from Lebanon and no one cares about what happens there.

To make things even worse, two groups are fighting with all sorts of weapons and explosives and there’s barely any intervention from the security forces to stop these battles. I have friends in Tripoli who haven’t gone out of the house for days now as there are snipers everywhere and things are out of control. A school bus was targeted the second day and two students were severely injured, the head of one of the party’s military wings (Beats me why they have a military wing) was killed today, a kid called Ahmed Taha was wounded by sniper gunshots in al-Baqqar also and they are still talking about a security plan. WTF is so complicated about this plan that it’s taking forever to implement?

I don’t think I need to say more about this matter. Few days ago, the Lebanese were celebrating the comeback of kidnapped pilgrims from Syria and the Lebanese Media was only focused on them and some even hosted them on popular shows and asked them to share their “Hollywoodian” stories (And Thank Qatar of course). Don’t get me wrong as I’m happy that they were freed (even though I disagree on the means used) and I want ALL kidnapped and jailed in Syrian prisons to get back, but it’s unacceptable that a war is taking place in a major city in Lebanon and no one’s doing the proper coverage or taking any initiative to stop this war.

If all our politicians and concerned parties can’t do anything about it, maybe it’s time we send 7ajje Hayat there. If she was able to get her relatives back from a Syrian group from inside Syria, then she sure can figure out a way to stop the war between Beb el Tebbaneh and Jabal Mohsen.