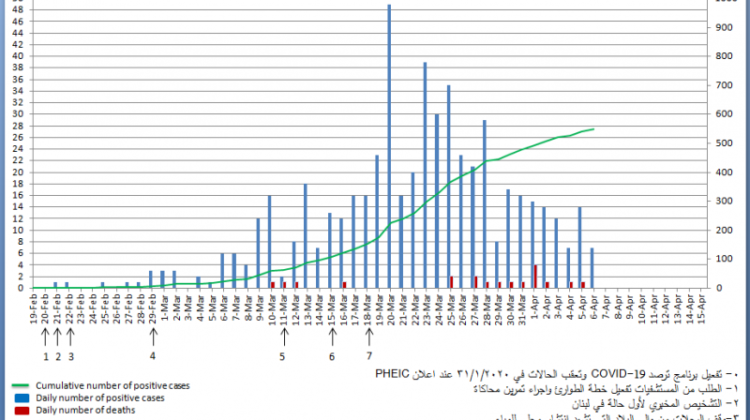 Health Minister Hamad Hassan appeared in a video yesterday re-assuring Lebanese that we’re close to achieving our goal, which I assume means containing the pandemic and flattening the #COVID19 curve, but did not provide further details or timelines.

So is Lebanon flattening the curve or not yet?

– As per yesterday’s MoPH report, we have 7 new COVID-19 cases, which indicates a drop in the number of daily cases, but these numbers are not very relevant if we’re not doing enough testing, which is the case in Lebanon.

– On the other hand, we’re not hearing about a peak in emergency admissions at any hospital, or an increase in people admitted to intensive care, which is a very good indicator. Unfortunately, there are no clear numbers as to how many people are in intensive care or were admitted to hospitals to build on; even the MoPH report is not detailed enough for some reason.

This being said, we might be headed in the right direction, and we can only hope the lockdown will end soon and life will go back to “normal” in Lebanon.

Why are we doing better than other countries?

Again this is an assumption based on the numbers we’re being provided, but I think there are several factors that might have helped in containing the pandemic:

– Lack of tourists and travel advice and warnings: We’ve already had a tough year last year and the tourism season was dead this year due to many factors, which is very bad for the economy obviously but might have greatly helped in containing the COVID19 outbreak.

– Lockdown measures by other countries:

A lot of countries went on lockdown or took measures before Lebanon or around the same time, which meant a lot of Lebanon and foreigners were stranded abroad and could not go back to Lebanon in early March. This probably helped as well limit the cases coming from Europe, GCC countries, Iran, Iraq and others.

As the Easter holiday approaches and Spring kicks in, a lot of Lebanese trend to travel, but the COVID-19 cases began surging “luckily” earlier in March prompting authorities to shutdown the airport.

– Lack of public transportation in Lebanon

No train, no metros, no tramways. Most Lebanese have their own cars or take the bus.

The government faced a lot of pressure from the people and the media in the first two weeks of March to take strict measures, and while I believe they were at least a week late, early decisions to shut down schools and universities, then restaurants then the airport helped a lot. I will not comment on the mistakes the minister & the government did, as the important thing for now is for the curve to flatten and Lebanon to get out of this mess.

On a side note, and despite the mass hysteria and the spread of rumors and fake news caused by social media, it did have a positive impact as a lot of initiatives and campaigns helped raise awareness and guide people to do the right thing.

All our doctors, nurses, nursing aids, hospital/medical staff, Red Cross first responders and volunteers, we cannot thank you enough for your courage, devotion and commitment during these times.

All in all, what’s crucial for Lebanon is to keep the number of patients needing intensive care or ventilators low in an attempt not to overwhelm the health care system. So far it seems to be working, as the hospital capacity is expected to be 576 beds + 234 ICU beds + 263 ventilators, all dedicated to covid-19 patients, by April 10, 2020, and we’re still below these numbers.

The coming two weeks are crucial for a lot of countries not just Lebanon, so let’s stick to social distance, staying home and hope we can get out of this mess the soonest. We have a much bigger mess awaiting us, and the government has poorly managed economic repercussions so far.