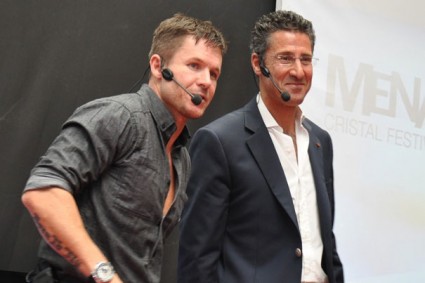 Fearless Felix was a speaker at the MENA Cristal Festival 2013 where he talked about his record-breaking 128,100 foot jump. Lebanoneguide.com covered the event and has a lot of exclusive pictures and featured an interview with Felix.

If you missed the jump, you can watch it [Here].

Here’s an excerpt of the interview:

“I didn’t think I was going to die. But I thought I was going to lose the ability to break the speed of sound,” he says. “[I was] more disappointed than scared.”

Disappointment was far from the emotion experienced by those watching the dive on monitors at mission control – including Baumgartner’s family – who erupted from stunned silence into cries of relief and excitement as the daredevil brought his spin under control. But just how much danger was he really in at that point?

“When you spin around like that your blood flow goes into your brain,” he says. “It’s called a redout, and that’s fatal. There’s a certain RPM when your blood has only one way to leave your body and that’s through your eyeballs. That means you’re dead.”

Baumgartner could have pressed an emergency button that would have released his drogue shoot – designed to stabilise his body were he to lose control. But if he did that, he would be giving up his chance to go supersonic. “I was very far away from pressing,” he says. “As long as I could breathe and think, I would not press it. Because I wanted to get this done.”

See Also:Scorpions Back in Lebanon on October 27
Posted By Najib
Categories EVENTS,INFORMATION,LEBANON