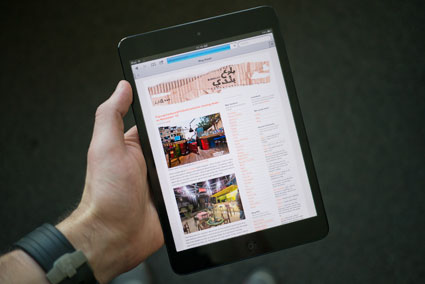 I really wasn’t interested in the iPad mini when it was first announced and didn’t think it made sense until I took it out of the box and held it in my hands. Now I’m wondering if there is a purpose for the regular sized iPad. The new iPad mini feels a lot lighter and slimmer than my now huge iPad 3 and I really LOVE the black anodized aluminum finish on the back.

Once I downloaded Zinio and the latest issue of Backpacker Magazine I realized why I’d rather have my iPad 3 over the mini. The problem with most of the magazines on Zinio is that they were originally intended for print in sizes similar to that of the regular iPad. Since the iPad mini is smaller, all the text in the magazines become smaller as well and makes it a lot more difficult to read. The fact the iPad mini doesn’t have a retina display isn’t helping its case either.

But for a first impression, other than the issue I would have reading magazines on it the iPad mini does make sense. I’ve stopped carrying my iPad when I travel and instead have been carrying my 13″ MacBook Air and my Kindle because it didn’t make sense to carry iPad 3 and MacBook Air at the same time. If I had the iPad mini on the other hand I wouldn’t mind taking it along since it wouldn’t be adding that much weight or size.

No idea if anyone in Lebanon has the iPad mini yet, mine was a review unit from Xcite.